Blog Tour – It’s All Greek to Me: Spanikopita

Okay so we’re not really in Greece but one might forget when looking at all the beautiful pictures and great recipes in Debbie Metanopolis’ new book It’s All Greek to Me! 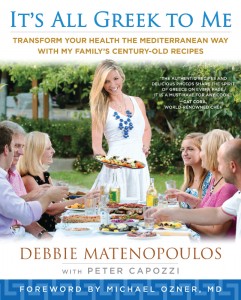 As many of you know Mr. RWB is half Greek and proud of it. I remember when we were dating there was a kind of rite of passage I had to complete; helping the women make koulourakia for the annual festival. Successful completion meant the little old ladies including the Theas would give approval. Fail and well…let’s just say I’m glad I didn’t have to find out!

When I was contacted about being part of this virtual blog tour, they sent a list of recipes to feature. Once I saw the spanikopita (spinach pie), I knew just what to do. A Greek face-off! Grabbing the trusty church recipe book and Debbie’s cookbook, off we went. (Mr. RWB is very good at placing phyllo and brushing with butter). As we made the two side by side it brought up the discussion of our trip *cross fingers* next year to Greece. Debbie sent me a number of suggestions to consider for our trip.

“You will have the greatest time. Greece is so beautiful and the people are so hospitable and welcoming. I highly recommend visiting the Acropolis and Parthenon in Athens. Also, head to Glyfada and Bouliagmeni on the outskirts of the city. This is where the beaches of Athens are, and there are some amazing little taverns there.  Take a Flying Dolphin ferry from Piraeus Port (in Athens) to the island of Hydra. This is one of the most scenic islands in all of Greece.  In the sixties, it was the playground for the rich and famous, and quite chic. To this day, there are no cars allowed on the island. The only way around is by bike or by donkey. It’s really quite charming. I would also recommend visiting the island of Rhodes. It is so rich in history. And of course, Mykonos is always a staple.  However, no matter how much fun it is, if you’d rather avoid the crowds and the jet set, then avoid Mykonos at all costs.  While you’re in Greece, make sure to eat Loukoumades. They are like a Greek beignet meets a donut dipped in honey and sprinkled with cinnamon and walnuts. I crave them when I’m not there.  They are so delicious they should be illegal!!! Also, whatever you do, please make sure to eat the grilled octopus. It will be the most tender and most delicious octopus you have ever eaten, as it will have just been caught a few hours earlier.  It may turn you into an octopus snob but it will be worth it. ;). I hope you guys have an unforgettable trip and I’d love to hear all about it when you’re back. :).”

So a few comments about the recipe before we get started; the recipe calls for 1 cup of dill. That is a TON of dill! I used an entire package from the grocery store and that was only ½ a cup. Also, the spinach cooks down a bunch. The picture they sent me was thick and mine…well not so much. Also, let’s talk about phyllo dough. This paper thin pastry gets dry and brittle easy so it’s best to keep the stack covered with a damp paper towel when you’re not grabbing a piece. And I know it says 1 lb. but what I’ve found is if you follow the directions, only half a pound is required. Now on to the recipe (face-off coming soon) and more questions answered below. 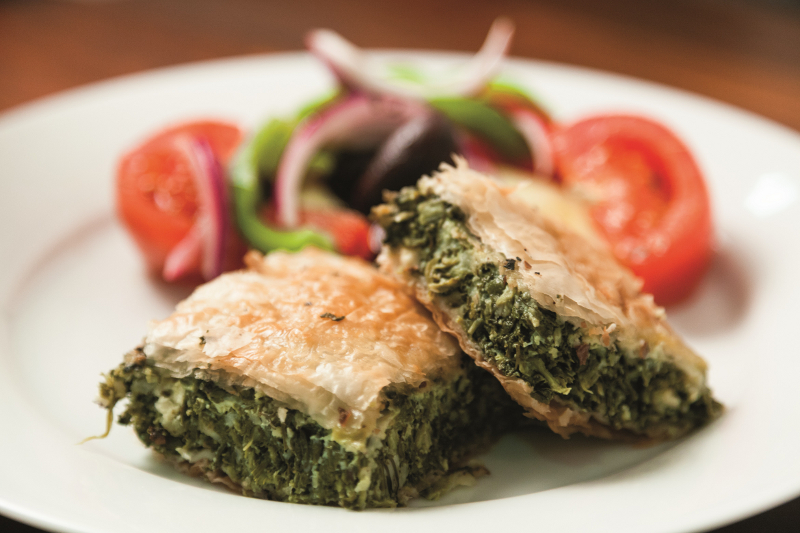 Reprinted with permission from It’s All Greek to Me

Heat 2 tablespoons of the olive oil in a large pot over medium heat. Add the scallions and the onion, and sauté until translucent, about 5 to 6 minutes. Add the spinach and sauté until just wilted. Remove from heat, let cool slightly, and transfer to a fine-mesh strainer. Cool slightly, then squeeze as much excess water as possible from the spinach, and transfer to a large mixing bowl.

Crumble the feta into small pieces and add it to the spinach mixture. Add the dill and mix gently to combine. Add the eggs and pepper. Mix well to combine with impeccably clean hands or a silicone spatula.

Roll the phyllo dough out on a flat surface, working quickly and keeping it covered to prevent it from drying out. Place 2 phyllo sheets into the baking dish at a time, centering them and letting the edges hang over the sides. Brush the top sheet of each 2-sheet layer with a little of the remaining olive oil, but do not brush the overhanging edges. Continue in this manner until you have used 10 of the phyllo dough sheets.

Spread the spinach-feta mixture evenly over the phyllo dough layers in the prepared dish. Fold the overhanging phyllo dough over the filling, then continue to layer the phyllo dough, brushing each 2-sheet layer with olive oil, until you have used all of the dough. Trim the top layers of phyllo to fit the baking dish. Slowly pour the remaining olive oil on top, and spread evenly.

Before baking, using a large knife, very carefully score the pie into 8 to 10 pieces, cutting through the top layers just until you reach the filling. Precutting makes it much easier to serve, as the phyllo dough becomes crisp and very fragile after baking.

Bake for 50 to 60 minutes or until the top is golden brown and flaky, watching carefully. Cool for 10 minutes, slice the precut pieces all the way through, and serve.

Questions with the Archegos:

Q: What was your favorite part about putting this book together?

A: My favorite part about putting this cookbook together was gathering all of the recipes from my family and translating them into English. There is so much history in these recipes. It was very nostalgic.  My mother gave me my grandmother’s hand written recipe books that were written in Greek along with her own. There were pages that were coming out that were obviously worn by the years of being referenced time and time again. I felt as if I was holding our most valuable family heirlooms in my hands. I feel very honored that my entire family was willing to share their treasured recipes with me and allow me to share them with the world.

Q: What was most challenging?

A:  The most challenging part of writing this cookbook was translating the measurements from the metric system.  That was no easy task.  As opposed to just going by a chart, I chose to personally re-measure everything just to be certain. I have to admit that this was the one time in my life I wished they had taught us more of the metric system in school.

For more including her take on the face-off, go to Spanikopita (coming soon).

Foodies are notoriously hard to buy for...I mean have you ever tried coming up with a near gift only to......